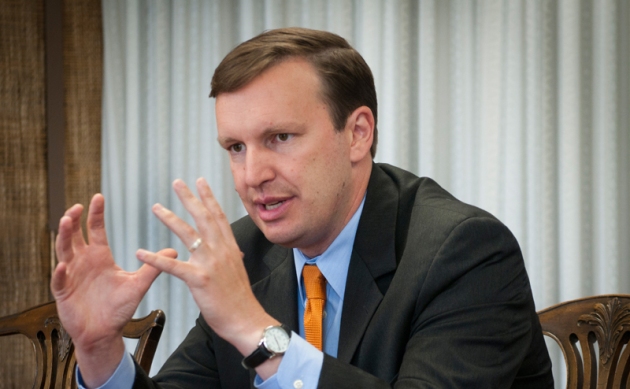 On Thursday afternoon the Center on National Security at Fordham University School of Law hosted Sen. Chris Murphy (D-CT) for a discussion about U.S. foreign policy.

During the Q&A, I asked (broadcasted on Periscope) Murphy – who self-describes as a progressive on foreign policy and whom Buzzfeed called the “Elizabeth Warren of foreign policy” – why he voted in May 2014 to confirm David Barron to the U.S. First Circuit Court of Appeals. Barron, as acting head of the DOJ’s Office of Legal Counsel, wrote the legal memo that justified the extrajudicial drone killing of U.S. citizen Anwar al-Awlaki (and his 16-year-old son Abdulrahman) in Yemen in 2011.

“I don’t hold any judge to one decision,” Murphy said. “That’s a judge that had a long history of other decisions that were a pretty good advertisement.”

Aside from the fact that Barron was not a judge who issued rulings as a judge before Murphy voted to confirm him to do such a thing, since Barron joined the First Circuit the panel has not made any major decisions on issues of national security or the war on terror that he has voted in.

The one questionable move by Barron – the subject of my question to the Senator – that doesn’t disqualify him from the likes of Sen. Murphy is quite a significant one: enshrining in law the presidential power to authorize the extrajudicial assassination of a U.S. citizen without trial. Jameel Jaffer, deputy legal director of the ACLU, called this legal memo “disturbing … ultimately an argument that the president can order targeted killings of Americans without ever having to account to anyone outside the executive branch.”

If, by “other decisions that were a pretty good advertisement,” Murphy meant legal positions Barron had taken prior to joining the Obama administration, Murphy isn’t particularly wrong. In a 2008 Harvard Law Review article, Barron urged executive branch lawyers to push back against the executive’s increasingly monopolistic power as commander-in-chief:

[E]xecutive branch actors, particularly those attorneys helping to assure that the President takes care the law is faithfully executed, should not abandon two hundred years of historical practice too hastily. At the very least, they should resist the urge to continue to press the new and troubling claim that the President is entitled to unfettered discretion in the conduct of war.

But by 2010, just two years later as a lawyer in the Obama administration, by drafting a legal memo that further legitimated the president’s sweeping powers, Barron had acted in direct contradiction to what he advocated lawyers do in his article. So for the sake of Barron’s credibility in the mind of Sen. Murphy, Barron’s poor actions in 2010 invalidated his noble stance in 2008. It’s a classic case of a government official’s actions not matching their words. What Murphy considers to be Barron’s “other decisions that were a pretty good advertisement” thus remains unclear.

In his answer to my question, Sen. Murphy continued, “I also will probably have an unsatisfactory position to you and to some others when it comes to some of the new tools at the president’s disposal to keep this country safe.

“I would argue that we should put in place a much more comprehensive and meaningful review process when it comes to our drone strikes. I think Congress has to get in the game here. Congress has to be involved in that oversight process, or we could consider setting up some judicial oversight process to authorize drone strikes. But what we’re doing now is unsatisfactory,” he said, stopping short of explicitly opposing presidential power to authorize the assassination of U.S. citizens or detailing what exactly about drone program he finds “unsatisfactory.”

He also told me, “I also am somebody who ultimately did vote for the renewed version of the Patriot Act. I think that there are ways that we made it exponentially better, but I don’t deny that it is important to give the administration some new tools with which to try to track terrorists down.”

Murphy didn’t specify what “new tools” the president should and shouldn’t have to “track terrorists down.” Was he referring to the government’s “death by metadata” program (officially known as Geo Cell) in which the NSA “geolocates” the SIM card associated with a suspected terrorist, enabling the CIA or military to launch a strike on the individual in possession of the device? If so, that doesn’t seem like a very “progressive” position. According to The Intercept:

One problem, [a former drone operator] explains, is that targets are increasingly aware of the NSA’s reliance on geolocating, and have moved to thwart the tactic. Some have as many as 16 different SIM cards associated with their identity within the High Value Target system. Others, unaware that their mobile phone is being targeted, lend their phone, with the SIM card in it, to friends, children, spouses and family members.

Some top Taliban leaders, knowing of the NSA’s targeting method, have purposely and randomly distributed SIM cards among their units in order to elude their trackers. “They would do things like go to meetings, take all their SIM cards out, put them in a bag, mix them up, and everybody gets a different SIM card when they leave,” the former drone operator says. “That’s how they confuse us.”

Was Murphy referring to the government’s dubious Terrorist Screening Database, nearly half of whose 680,000 people are not affiliated with any terrorist group? Or was he referring to the no-fly list, whose length Obama has increased ten-fold since taking office?

Murphy’s support for the renewed version of the Patriot Act, known as the USA Freedom Act, doesn’t put him in the progressive camp, either. He had a chance to join fellow senators, led by libertarian Rand Paul, who opposed the act on the grounds that it didn’t go far enough in restricting the NSA. That faction simply wanted Section 215 of the Patriot Act – the section that gives the government broad surveillance power – to sunset as scheduled.

Although Jaffer, the ACLU lawyer, called the USA Freedom Act a “milestone,” he also said, “The bill leaves many of the government’s most intrusive and overbroad surveillance powers untouched, and it makes only very modest adjustments to disclosure and transparency requirements.”

To his credit, in September Murphy spearheaded a bill (that failed to pass the Senate) to block a huge U.S. arms deal to Saudi Arabia in light of the Kingdom’s brutal war against Yemen. That’s what a progressive foreign policy position looks like.

While Sen. Murphy often lands to the left of the majority of Congress on foreign policy, it’s otherwise clear that if he wants the “progressive on foreign policy” label, he needs to reconsider his positions on several aspects of the war on terror.

Disclosure: This writer provides research assistance to the Center on National Security on a weekly basis.