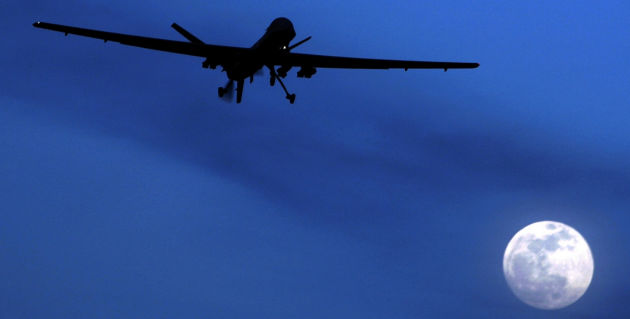 Originally published at the Fordham Observer.

“Iraq’s future will be in the hands of its people. America’s war in Iraq will be over,” President Obama announced to troops at the Fort Bragg military base in North Carolina on December 14, 2011, one day before the official end to the eight-year-long Operation Iraqi Freedom. I wish those words still held true. But, nearly three years later, President Obama became the fourth consecutive president to authorize military action in Iraq. Welcome to 16 years of George W. Bush foreign policy.

Whenever the United States bombs a Muslim country, it’s justified as “humanitarian intervention” (“to liberate the women!“). And President Obama can easily sell this propaganda to his liberal base. But bombing for “humanitarian” ends never actually helps anyone or defeats an enemy. We can’t just bomb our way to peace. Terrorist organizations use bombing to recruit more terrorists. When we order drone strikes on wedding ceremonies in Yemen to “kill terrorists,” when we detain Muslims at Guantanamo Bay without charging them with a crime (600 of the 779 were released without charges, many after being held for years), when we kill actual U.S. citizens without charging them with a crime, we’re actually creating more terrorists – the principle of blowback. Terrorists become terrorists because we are terrorists.

Also, has anyone considered that maybe we don’t actually care about solving “humanitarian” crises in the Middle East, considering that the U.S. government doesn’t oppose the violent subjugation of populations there? Example A: Israel. One thing that every elected official publicly agrees on is continued support for the apartheid state of Israel and its war crimes. Example B: Egypt. Not only did Hillary Clinton say, “I really consider President and Mrs. Mubarak to be friends of my family,” but also the United States has continued to militarily and economically support the dictators of Egypt since Mubarak’s ouster. Example C: Saudi Arabia. According to a secret National Security Agency (NSA) memo published by Glenn Greenwald of The Intercept, the United States “has an interest in regime continuity” in the brutally repressive government of Saudi Arabia. With our history of supporting tyranny and oppression, why would anyone believe the propaganda about “humanitarian” goals in the region?

Let’s remember another fact: ISIS exists because of us. When a top State Department official said to House and Senate lawmakers in July that ISIS is “worse than al-Qaeda,” did he consider why? It’s because of the nearly nine-year U.S. occupation of Iraq and, more largely, the Global War on Terrorism. At the time of 9/11, terrorist organizations (including al-Qaeda) were small and unorganized. Today they are powerful. During the occupation of Iraq, we destroyed its infrastructure, government, and military. These newly unemployed Saddam-era soldiers joined insurgent militias – eventually forming a coalition that has become ISIS. (Before ISIS was ISIS, it was called al-Qaeda in Iraq.) The United States also supported and installed Nouri al-Maliki as prime minister in 2006, who ruled along strict Shia sectarian lines, squashed dissent, and thus convinced many Sunnis that their only hope was in the form of a military: ISIS. Moreover, when ISIS members were fighting a civil war against Syrian President Bashar al-Assad, the United States gave them weapons because it opposed the Assad regime. Sounds a lot like when we trained and armed Osama bin Laden and the Afghani mujahideen against the Soviet Union in the 1980s.

No one doubts that ISIS is reprehensible. So what can we do? A lot, actually, according to Phyllis Bennis, fellow at the Institute for Policy Studies. Call for an arms embargo on all sides. Work with Iran to put pressure on the Iraqi government to end sectarianism and human rights violations. Use the United Nations and Russian to help bring about a peaceful end to the civil war in Syria. Lastly, of course, increase non-lethal humanitarian aid to refuges across the region.

The end goal is to stop all wars – not create more of them. The only way to do that is to take all military action off the table. President Obama did indeed speak truth in that same speech at Fort Bragg when he said, “It’s harder to end a war than to begin one.” We must end our role as, in the words of Rev. Martin Luther King, Jr., exactly one year before he was assassinated, “the greatest purveyor of violence in the world.“