(See my Perisocope video of the police action here.)

For the past hour and a half, police have gradually pushed demonstrators and other members of the public out of the center of Public Square in Cleveland, the site of 2016’s Republican National Convention.

A local ABC reporter told (about 4:30 in the Periscope video) her TV audience that police used a “T-Formation,” though it was difficult to make out the T-shape from any side of the park.

At the beginning of the police action, an officer informed me as I was leaving the square that I wouldn’t be be able to return. By the time I began heading back to the center, police had cleared the area. 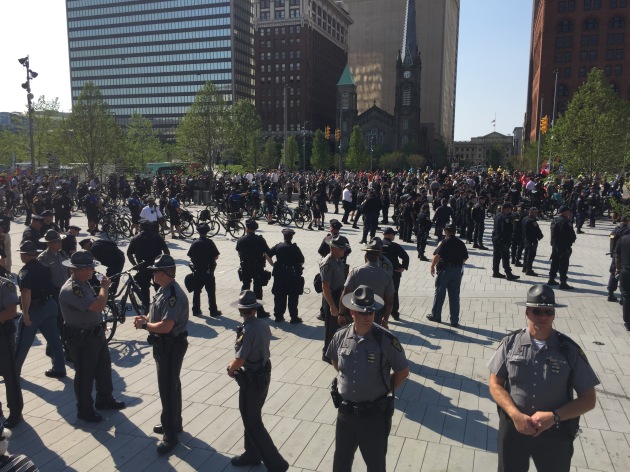 One officer explained to me (about 8:30 in the Periscope video) the reason for the spatial restriction: “We had some issues before. Just, uh, keep everybody safe.”

Minutes later, police began to loosen their formation, letting people back into the center again.

As I began drafting this post, a line of bicycle officers rushed back into the center to reclose the square. There were at least three officers at the center with riot gear: plastic face mask, helmet and military-style backpack.

As of publication (about 6:05 p.m.), several of the bicycle officers rushed out heading east on Superior Avenue. A line of white-uniformed officers have entered the center of the square.

Several passersby have said, “good luck, guys” to the line of officers.